With spit and baling wire 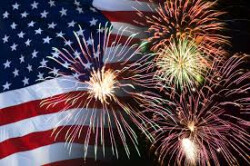 The strangest Independence Day party I ever attended was held in London in the early 1990s. I was spending the summer in London, doing an internship at a development bank, which is a fancy way to say that I'd found a way to spend some time in a world-class city, and I intended to make the most of it.

A bit before July 4th, I received (for no apparent reason) an invitation to celebrate American Independence Day at the home of the Canadian Ambassador. There was no indication how I had come to their notice, and, likewise, no explanation for why the Canadian Ambassador was inviting stray Americans to celebrate American independence. Either way, I had no other plans and had never before had the opportunity to attend a party at an Ambassador's residence, so of course I accepted.

When I arrived, it was clear that the wife of the Canadian Ambassador had embraced this project with great enthusiasm. For months ahead of time, she had wheedled everyone she knew who was visiting the United States to bring back something special, and so there were American-flag paper plates and American-flag napkins and real Toll House morsels for real American chocolate chip cookies. The only thing lacking was furniture -- any furniture. It turned out that the residence had been burgled the night before, and the thieves had made off with sofas, tables, chairs, televisions: if it could be moved, it was gone. But the Ambassador's wife was made of stern stuff, and so the party went on -- dozens of people standing in empty rooms, eating delicious food and chatting up a storm. The whole thing took on an aspect of bonding through adversity, and, truth to tell, it was probably a lot more fun than it would have been under better circumstances.

The birth of our nation, too, had a bit of that improvisational quality to it: men and women doing the best they could under tough circumstances, trying to hold together a revolution with spit and baling wire until they could figure this thing out: arms, trade, cooperation between states, what it might look like to be free.

At its best, discipleship is like that, too. Figuring out what it might look like to follow Jesus, one prayer, one act, one step at a time. Pretending we are the people we would like to become, until the presence comes to feel natural and we realize we have grown into a new identity. Trusting grace with one small risk, then another, until we are able to dare great things for God. Figuring out what it might look like to be healed, to be made whole, to be free.

St. Paul writes, "For freedom Christ has set us free. Stand firm, therefore, and do not submit again to a yoke of slavery." (Gal 5:1) It's empowering and frightening all at the same time. Freedom means we are partners with God, co-creators of the world in which we live, and freedom means we can mess that world up right good. Freedom means we are not bound by senseless rules, and freedom means we cannot simply depend on rules, but must use our own agency. There are so many ways to fall back into slavery: addiction, consumerism, malice, lying, scheming, mis-using the love we have been given, trading Christ for the promise of security. But the God who has given us this freedom is himself bound: bound to us by the law of love that is God's very nature. So let us bind ourselves to one another in the free gift of love offered and love received. It is the only thing that can save us from slavery.

Deborah, outstanding transition from a 4th of July celebration in London to scripture about freedom. Always a pleasure to drink from your cup.