Faith Talk - The Other Michelangelo

Most know the Baroque artist Michelangelo Merisi as Caravaggio.  The word baroque is a French transliteration of "pérola barroca", which means "irregular pearl."  The Baroque period in art was a pretty radical change from the art of the Renaissance and the term was initially applied to artists of that period in a derogatory way.  Baroque painters were criticized because their paintings were noisy and too abundant in detail, in contrast to the more sober and rational renderings of the Renaissance.  Baroque painters used a technique of the Renaissance called chiaroscuro - the relationship between darkness and light - in heightened ways. The Baroque period in painting was, in its day, like Punk Rock or Hip Hop has been to music in ours. With a nod to the readers of this Daily Cup maybe a more helpful comparison is that what artists like Caravaggio and other Baroque painters who used "exaggerated motion and clear, easily interpreted detail to produce drama, tension, and exuberance" in their paintings brought to their audiences was similar to what an artist like Elvis brought to the American music scene in the late 1950's.

Caravaggio's personal life mirrored the early criticisms of Baroque art - if the artists of the Renaissance were sober Michelangelo Merisi was certainly not.  Merisi was a drinker and a brawler and died mysteriously at the age of 39.  Somewhat ironically, as the Baroque movement in art grew in popularity the Roman Catholic Church encouraged the artists of the Baroque period whose art, in the midst of the Council of Trent and Protestant Reformation, had the ability to evoke in those seeing their work a more direct and emotional involvement in the work of the church.  Cardinal Francesco del Monte took the young and expressive Michelangelo Merisi into his home and brought him early, if secular, commissions. "Caravaggio" would go on to paint some of the most vivid and evocative depictions of sacred art that I have ever seen: The Calling of St. Matthew; The Crucifixion of St. Peter; St. Jerome; The Seven Works of Mercy; David with the head of Goliath; Supper at Emmaus; The Entombment of Christ; Conversion on the Way to Damascus.

I wonder if we as the church today need to be more baroque.  To be an irregular pearl.   I don't know exactly what that looks like, and in the midst of the season when we hope to move from darkness to light, it's a question worth asking.  In any case, and in the light of the season, heres Caravaggio's : Adoration of the Shepherds 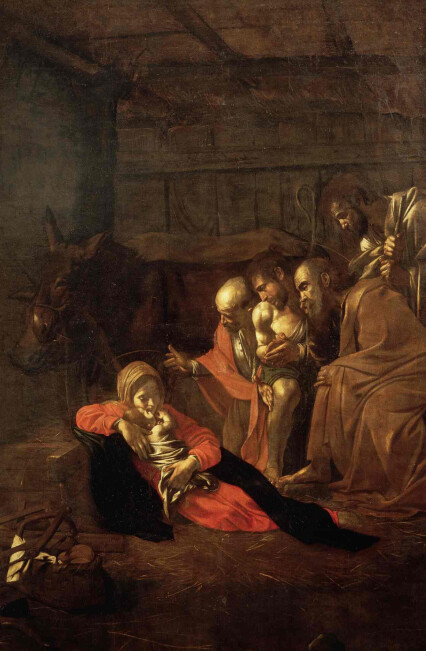