I thought I’d have more to say about forgiveness by now. I’m most of the way through the book I chose from among this year’s Lenten reading groups – Miroslav Volf’s Free of Charge. But in contemplating God’s approach to our sin this morning, I find myself less drawn to Volf’s conversation partner of choice, Martin Luther*, and more intrigued by the man we remember today in the Episcopal Church’s calendar of saints: John Donne.

Donne would have bristled to be called a saint. While we have looser criteria than some for what makes a saint, the author of some of the raciest love poetry I’ve ever read might still wonder what he’s doing in such august company. He fought ordination and an explicitly “holy” life for a long time, seemingly caving only when it was clear that a political career just wasn’t in the cards.

It was during this time of poverty and thwarted ambition that he wrote most of the Divine Sonnets. I appreciate poet Rupert Brooke’s depiction of Donne at this time: “the one great lover-poet who was not afraid to acknowledge that he was composed of body, soul and mind, and one who faithfully recorded all the pitched battles, alarms, treaties, sieges and fanfares of that extraordinary triangular warfare.”

We see that struggle in “Goodfriday, 1613, Riding Westward.” After contemplating how he finds himself riding in the opposite direction from the land where Jesus died and the sheer difficulty of looking on Christ’s suffering directly, he decides that perhaps it’s best that his back is turned. He ends thus:

O Saviour, as thou hang’st upon the tree;

I turne my back to thee, but to receive

Burne off my rusts, and my deformity,

Restore thine Image, so much, by thy grace,

That thou may’st know mee, and I’ll turne my face.

Where does he get this stuff? Well, from the Bible in large part. Say what you will about the God of Holy Writ; the Almighty is not indifferent to our individual and collective failures. Our refusal to honor the image of God in ourselves and others – our rejection of the beautiful gifts we’ve been given - makes the God of the Bible angry. We were made for so much more, and Donne knows (or at least, suspects) that.

As critic Helen Gardner once described Donne: “As a love poet he seems to owe nothing to what any other man in love had ever felt or said before him; his language is all his own. As a divine poet he cannot escape using the language of the Bible, and of hymns and prayers, or remembering the words of Christian writers. Christianity is a revealed religion, contained in the Scriptures and the experience of Christian souls: the Christian poet cannot voyage alone.”

Before we cast off the image of a disciplining God too quickly, let’s think about what all of this discipline is designed to do. It burns off our rust – makes us more agile, more able to respond quickly to the movements of God’s grace. It makes recognizable to ourselves again. It restores the beauty we forgot was there and enables us to receive the already extended gift of God’s forgiveness.  This is a God who loves us too much to leave us to our own devices, who knows we can’t turn wholly on our own. In God’s eyes, we’re worth bothering with, worth correcting – or so Donne hopes.

For all those who remind us that we are body, soul and mind this Lent – and for the reminder that we never voyage alone,

*At press time, Martin Luther was battling Bible translator Joseph Schereschewsky for a spot in the Final Four in the tournament of saints known as Lent Madness – www.lentmadness.org. 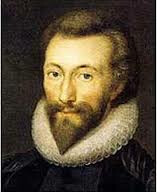 As always, nice post. And thanks for mentioning Lent Madness. I voted for Schereschewsky (and I am sorry that he lost).

Your posting is wonderful; thanks for highlighting the human side of Donne. Lent Madness is hilarious but I'm trying to figure out who Sarah and Franz are. Guess you had to be there from Day One......