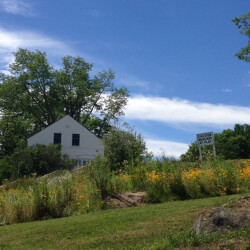 Most summers, my mother and I travel to Vermont to attend a chamber music festival that we've been going to since I was about fourteen years old. By now, the trip is a familiar one: we know the landmarks, the curves in the road, the restaurants, the silhouette of the mountains against an open sky. Going there is a sort of pilgrimage: those places are now hallowed for us by years of memories, and we eagerly go to the same places, year after year, marking the changes in our lives against their enduring continuity.

The last few years have been different. We have not been able to go, and between our last visit and this one, Hurricane Irene swept through. It inundated the town of

Wilmington, which has long been the center of our time there, submerging the main road to a depth of about eight feet. Shops, homes, restaurants -- all were swept away.

So it was with some trepidation that we returned. What would be left? We knew that
neighbors had been helping one another clear out, but who had had the heart to rebuild?

When we got there, we found this: a town apparently unchanged, except that Dot's restaurant had become gray. The rest of the street looked the same, although there were
lines painted on many buildings to show how high the water had come. The town was a living symbol of resurrection.

I was thinking a lot about Wilmington this weekend, when our church hosted a lunch to raise funds for several families of Syrian refugees. Unlike me, they cannot return to the places they loved. Many of those places no longer exist, except in the minds and hearts of those who once treasured them. Perhaps, someday, they will rebuild their homes. Perhaps this move is forever.

It was a beautiful morning. One man spoke during our worship, sharing his experience of reinventing himself in three different countries, transitioning from journalist to gardener. Others cooked falafel and delicious salad in our kitchen; groups of children danced. Looking at those children, I could not help but think that each of those dances probably meant something; they had a context that we -- who had never lived in Syria -- could not begin to understand. And yet, off in the wings were the mothers of the children: giggling, jostling to take photos, radiant with joy. They had lost so much, but they still had this: the ability to teach their children the culture that was important to them, the joy of sharing who they were with strangers, the knowledge that these children -- unlike so many others -- were safe.

We rebuild what we can, and bricks and mortar are the least of it. Our families, our friendships, our sheer resilience keep us going, even when the waters overwhelm us. Solomon wrote it best: many waters cannot quench love, nor can the floods drown it. (Song of Songs 8:7) Thanks be to God. 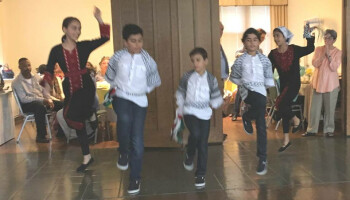