Starting May 29, 2022, through Labor Day Weekend, our schedule changes for your convenience. We hope to see you during the summer, whether in our in-person services or via Livestream.

Weekly Live Sunday Services are live-streamed on our Youtube channel (St. Alban's DC) at 10 a.m. every Sunday, as is our Spanish service at 11:15 a.m.

Faith Talk - The Rest is Silence

The Rest is Silence

"Speak only to improve on the silence." Such is the advice frequently given to me by one of my colleagues in Godly Play, the method of spiritual guidance we use with our kids here at St. Alban’s.* If only I could heed it more often. We know from Ecclesiastes (3:7) that there is “a time to keep silence and a time to speak.” How do we know the difference?

Sometimes silence can be improved upon. It may just be a pause in between speakers – a way to be polite or to stall until we can formulate our next point. We’re not really listening for anything. Other times, we’re silent because we don’t think we’ll be heard; we don’t think that what we say will make any difference. We’re afraid of saying the wrong thing, so we don’t say anything. (As someone trying to learn a new language – in this case, Spanish, I’m frequently guilty on this front.) Silence can even serve as a way to withdraw from others or to deny responsibility later if our conversation partners make a bad decision. The silence can be cold, even icy.

In such moments we may, in fact, be called to speak. If we’re withholding ourselves out of fear or because we’re hoping someone else will speak for us, we may be shortchanging everyone involved. There are often pieces of the puzzle that only we hold, and there are times when the whole group suffers as a result of our silence.

So how do we know when to stop talking then? Perhaps it’s when we realize our words are merely anxious chatter – or worse, weapons used to silence others. We sometimes keep talking because we fear we haven’t reached anyone; the silence feels empty. Silence doesn’t have to be empty, of course. It can be full. It can be a way to rest in God – and to listen for all the things that words alone can’t communicate. It’s hard, after all, to listen to others, to God or even to our own deepest selves if we’re constantly talking.

Silence can be particularly important when we’re dealing with children. They don’t always have the words to say what they mean; we have to slow down, to watch and listen for what they might really be trying to communicate with their hands, their eyes, their artwork. Or perhaps they just know, in a way that we’ve forgotten, that words aren’t always necessary. Sometimes it’s our job to step out of the way and simply let them enjoy the One who can’t be contained by even our best words.

We don’t always need to fill our rooms with words to honor God. We can let our actions speak. Or better yet, we can stop worrying about the need to speak for once and try listening instead. We can let God find us in the silence – to comfort and challenge and strengthen us until it’s the next right time to speak.

For the courage it takes to keep silence as well as to speak - and the wisdom to know the difference, thanks be to God.

*My colleague, in turn, first heard this phrase from leadership consultant Debbie Asberry. 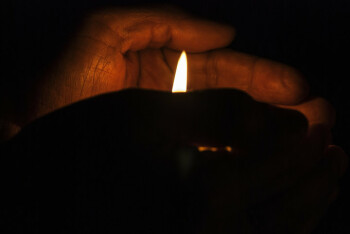 Emily, once again you have whammed the nail squarely on its head! Great job, and THANK YOU. Geoffrey has stressed every time he speaks about the need to reach out... yet VERY few people have done so in a genuine wish to converse, especially to Sonya, Joan, and others who have done so much for this parish. Perhaps your message will be one more reminder that we (and I include myself) have left bodies of friends strewn by the wayside…..

You didn't mention tweeting, but it does come to mind.....lol