Faith Talk - The Hymns We Carry

The Hymns We Carry

Posted by The Rev'd Emily Griffin on September 30, 2016 with 1 Comments

Sometimes we don’t know how we truly feel about something until we’re asked. Last Sunday we sang one of my favorite hymns, “Crown Him with Many Crowns.” My utter lack of a poker face is revealed every time I sing this; I inevitably end up beaming. When asked afterwards why I love it so much, my first response was that it was Owen Meany’s favorite hymn. (Owen is perhaps my favorite character in all of fiction, but more on that later.) Next came this: I got to take it with me when I left the church of my childhood.

I didn’t grow up on the Episcopal branch of the Christian family tree; I’m guessing many of you didn’t either.  My childhood and adolescence were spent in the Church of the Nazarene, an offshoot of the Methodists (who themselves share roots with us in the Church of England.) As a proud church in the Wesleyan tradition, Nazarenes sing all the old Charles Wesley hymns similarly kept for us in our Hymnal 1982: “Love Divine, All Loves Excelling,” “Jesus Christ is Risen Today,” “O For a Thousand Tongues to Sing,” and so on.

But a lot of the hymns I grew up with simply aren’t sung much by Episcopalians.  I’m not sure why sometimes, apart from differences in temperament.  We tend to go for more stately hymns. Our hymns seem more comfortable in stained glass and stone than the tent revival hymns of my youth. Nazarenes sing more about heaven than we do, and they certainly sing more about the blood of Jesus than any group of Episcopalians I’ve ever known.

Fortunately though, there are a few more non-Wesley hymns we share, including my old favorite. I’m not alone in loving it. In A Prayer for Owen Meany by John Irving, the narrator’s mother dies while he is still a boy. At her funeral, his best friend Owen belts out this hymn, especially this verse (read the novel to know why it’s all in CAPS):

“CROWN HIM THE LORD OF LIFE, WHO TRIUMPHED O’ER THE GRAVE, AND ROSE VICTORIOUS IN THE STRIFE FOR THOSE HE CAME TO SAVE; HIS GLORIES NOW WE SING, WHO DIED AND ROSE ON HIGH, WHO DIED, ETERNAL LIFE TO BRING, AND LIVES THAT DEATH MAY DIE.”

Looking back, the narrator comments: “For when else, if not at the death of a loved one, do we most need to hear about the resurrection, about eternal life – about him who has risen?” And later, “That is the nature of hymns – they make us want to repeat them, and repeat them; they are a part of any service, and often the only part of a funeral service, that makes us feel that everything is acceptable.”

The imagery is odd for some, I know. We tend to think of Jesus in a borrowed stable in Bethlehem, on the dusty roads of Galilee, or on the hard wood of the cross; the only crown we can realistically picture on him is a crown of thorns. The images in the hymn come more from Revelation than the Gospels; they speak more to the Jesus we know after Easter than the one we knew before it.

Personally, when I think of Jesus as king, I picture neither fairy tales nor dictatorships. I imagine the kingdom he talked about actually existing on earth as it is in heaven and all who will be gathered there. I envision the time when sorrow and pain will be no more, when death will be no more – when Love will finally prove itself stronger than death. I let myself feel the “not yet” part of the kingdom even as we live in it now, and the glory of that can’t help but shine through a little.

How about you? Which hymns do you carry in your heart? 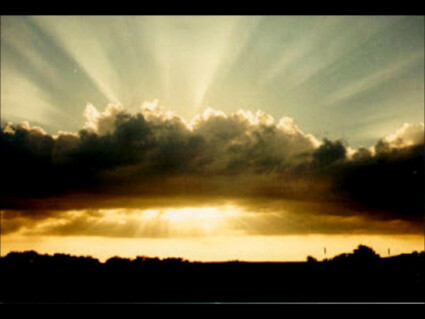 Sacred music is a strong bridge across the generations and Christian communities. Your mother is smiling, Emily.