I think I’m finally ready to write about forgiveness. Some things I can only see this side of Easter. As you may know, my Lenten book this year was Miroslav Volf’s Free of Charge: Giving and Forgiving in a Culture Stripped of Grace. Like many in the book group who tackled it, I found it a challenge – for reasons I couldn’t quite name at first.

I could pick apart his view on atonement, but I won’t. That wasn’t the true source of the rub. There’s too much both to praise and question in the book to be thorough here. To get to the heart of the matter:

For Volf, “To forgive is to give wrongdoers the gift of not counting the wrongdoing against them” (p. 130). The wrongdoing is not excused; it’s condemned as unjust and then forgiven. OK - so far, so good.

He rightly notes that forgiveness is not fundamentally about our own healing, but is a genuine gift to the one who hurt us.  He also rightly adds that we are capable of forgiving only because we’ve been forgiven by God, and it is only through God’s strength (acknowledged or otherwise) that we can accomplish it. It may not happen fully for us on this side of eternity.  Volf recognizes that we may need to channel God’s forgiveness long before our feelings follow and admits that we cannot and should not forgive exactly as God forgives – because we’re not God.

So what’s my problem? It’s in Volf’s depiction of life post-forgiveness. He concedes that actions have consequences, and that we sometimes need to enact what he calls “discipline” in order to mitigate future harm. There are times when, for safety’s sake, we cannot afford to forget. But in his well-intended desire to release the wrongdoer from retribution and guilt and in his hope for restored relationships, he strays at times farther than I think the Gospel warrants. In his words, “When we forgive, we acknowledge the offenses and blame the perpetrator. But then we treat the person as if the offense did not happen. To forgive means most basically to give a person the gift of existing as if they had not committed the offense at all” (p. 175).

That kind of erasing the record wrongly implies that we can turn back time – that no real death has happened. And in most cases when deep hurt has occurred, something has died – whether it’s our expectations or hopes or the future we once imagined. What comes on the other side of death is not resuscitation – a restoration of the way things used to be – but resurrection. And while we cannot say what God-given resurrection will look like in advance (or how long it will take – we can stay in Holy Saturday for a long while), what we can say with certainty is that the new life will not be exactly like the old. It will be genuinely new – with new possibilities for everyone involved.

Volf is absolutely right that the Greek root for “forgive” has to do with releasing something. When we release someone from being defined by the wrongdoing he or she has committed against us (and may, in Desmond Tutu’s words, choose to renew or release the relationship in the process), then we’re both released and free to live into a different future. When we refuse to forgive, we both stay bound to a past we can’t change. Easter promises so much more for us than that.

Perhaps this is part of what poet Wendell Berry means when he advises us to “practice resurrection.”*  God knows, we can’t raise ourselves from the dead; we can’t raise anyone else either. But by extending God’s forgiveness, we clear the space for God to do what only God can. In thanksgiving for all the signs of forgiveness and new life we find this Easter – the ones we can imagine and the ones we can’t yet…

*This line comes from “Manifesto: The Mad Farmer Liberation Front.” Provocative, but a worthy read. 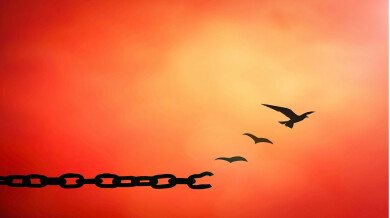 What an honest assessment of a subject that's so hard to assess --- forgiveness, and then what? That's the problem. Now I have to read the book! Thanks for reference to that fine fine poem. Every one of us needs that poem. Especially today.

As one who greatly struggled with this book, I very much appreciate your reflection. It seemed that every time I got a passage to cling to, it got challenged in subsequent writing. Your patient "translation" helps. (Eileen, I'd be glad to loan you the book.)