Faith Talk - Not Too Late

Why should we care about the wise men? They’re at best day players in the Christmas story. Why do these walk-ons get a feast day in relative prime time, for example, while Joseph’s feast day gets buried in Lent on March 19? Today on the Feast of the Epiphany, we celebrate the tardy arrival of the Magi. How is the story of Jesus somehow incomplete without them?

One wonders why the “king of the Jews” was even on their radar in the first place. They probably weren’t Jewish. They were most likely Persian with their own traditions to accept or reject. It could have started with curiosity. They weren’t necessarily committed to any one tradition at the start of things.

In a world with so many choices, how can you know that any one religion is true? If you didn’t inherit anything you felt was worth keeping, why not pick and choose – a little Jewish prophecy here, a little astrology there? Pagan beliefs at the time associated the movements of kingdoms with the movements of the stars. A rising star pointed to the birth of a new king. When no one truly knows what comes next and everyone is making more-or-less educated guesses – whether it’s the prophets or the stars offering guidance – perhaps they didn’t see the difference.

Or maybe this was the first time a world of disorder was revealed to them, and their old answers didn’t satisfy anymore. A star that didn’t follow their maps led them to question the value of their maps. What good was a narrative that claimed to explain everything yet failed to explain this? Their worldview was starting to shatter, and they needed something to make it whole again – to make them whole.

For many of us, this realization doesn’t hit us with something as benign as stargazing. For some, it’s the world of ideas – philosophers, novelists, scientists who shake our assumptions and make us wonder if our core stories really are just wish-fulfillment fantasies. Or maybe it’s a tragedy, an unspeakable loss that breaks our world open. We want an alternative to the cold comforts of generic morals, but we aren’t sure where to turn.

We don’t really want a faith of our own making. We want to be characters in a bigger story that we didn’t invent, that wasn’t thought up yesterday. We want a light in the dark to show us the way. So we follow the light in front of us, not really knowing what we’re searching for until we find it – or it finds us.

Who knows what led them to Jesus? Maybe they just wanted to get away from their day planners and have an adventure. I’m not sure it matters. What matters is that they finally did arrive – and so helped to open the door for the rest of us latecomers.

With the wise men, the dividing wall between races and cultures, between Jew and Gentile, starts to crumble, and the light of the world makes the ends of the earth come closer. If God can use a star to bring these foreigners to Jesus, there’s no telling who else might be included or what other means God might use to get our attention.  The wise men found out that the Creator of the universe isn’t just the king of the Jews, because the One who made the stars found them where they were and drew them into a much larger story – one they couldn’t have created or sustained on their own.

The good news today is that it’s not too late – not for the wise men, not for any of us. No matter what brings us to Jesus, no matter how long we’ve had to travel or how many detours we’ve taken, we’re still welcome. The light of the world can still find us. The story isn’t complete without us either. 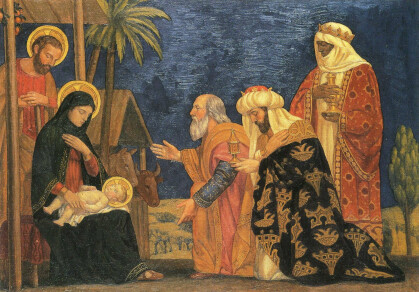