Zealotry and lost causes – here in our nation’s capital, we see our fair share of both. Today, on the feast of St. Simon and St. Jude (October 28), we recognize the existence of both not just in our public lives but in our faith lives too.

As for the saints who inspired this day, we really only know their names – and even those we can’t keep straight. Both were among the original twelve apostles of Jesus. We know that much. Luke refers to Simon as “the zealot,” while Matthew and Mark call him “the Cananaean” (or as a parishioner at a friend’s church delightfully mispronounced it, “Simon the Canadian.”) We don’t know what kind of zealot Simon was, whether or not he was part of a group of political insurrectionists called the Zealots. It may simply have been the most pronounced aspect of his personality.

As for Jude, he’s sometimes known as Judas son of James, sometimes Thaddaeus, or as John more bluntly puts it, “Judas (not Iscariot).” Over time, he’s become famous in Roman Catholic circles as the patron saint for lost causes. Tradition says this is because he was one of the least-called upon saints for intercession. Folks were so afraid of calling on Judas Iscariot instead that they avoided the name altogether. Jude became the saint of last resort. He would then “go out of his way” to intercede for those who did call on him, particularly in cases where all hope seemed lost.

According to legend, Simon and Jude were martyred together in Persia. I wonder how they got to be partners. I picture Jude as a quiet type, one who didn’t necessarily correct people when they got his name wrong, who didn’t care because he wasn’t seeking credit. In his mind, he was doing only what he ought to have done. His silence may have cost him at times, but left to his own devices – he didn’t know any other way. Now pair him with Simon, so known for his zeal that it became part of his name.

Is there a place for zealots in our common life? Most of us have witnessed the convert’s zeal – the boundless enthusiasm of someone who has truly discovered Jesus for the first time. I remember my own zeal in joining the Episcopal Church as a young adult. I would rave to anyone who would listen about the beauty and elegance of the Prayer Book, how it formed the perfect antidote to the triteness and trendiness of pop Christianity. I hadn’t yet mastered the “still waters run deep” approach to devotion. (In truth I still haven’t.) Looking back, I hope my zeal was seen as more amusing than obnoxious – but, of course, we don’t get to decide how we’re perceived.

Zealotry can take more destructive forms, certainly. The line between focused and narrow-minded can be hard to discern. Praiseworthy loyalty can devolve into bitter partisanship. We can keep fighting long after a cause is truly lost. (Causes can be lost; people are another story.) We can become so driven to defend our rightness that we lose sight of those we hurt in the process and, only after the dust has settled, do we notice the damage we’ve left in our wake. No one who cares deeply about anything or anyone is immune to this. But if Jesus saw fit to include a zealot among the original Twelve, then I suspect there’s hope for even the most fiery and stubborn among us.

I’m guessing that a firebrand like Simon appreciated the quiet faithfulness of someone like Jude. And perhaps Jude appreciated Simon’s ability to articulate what Jude thought but couldn’t find the space or courage to say. Both approaches have their drawbacks, God knows, but both equally have the capacity to be faithful when tempered by the other and guided by grace. Thanks be to God – none of us is a lost cause. 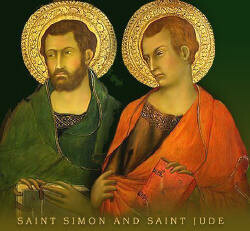