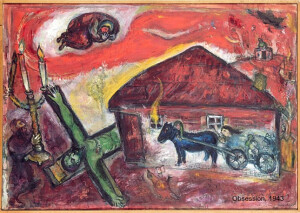 In writing about Jesus artist Marc Chagall (1887-1985) imagined ‘Christ’ in two ways. As ‘the great poet whose poetical teaching had been forgotten by the modern world’ and as ‘the true type of the Jewish martyr.’  In depicting numerous crucifixion scenes (which in the 1930’s and 1940’s  became – literally and figuratively –  an obsession for him) Chagall was following an established tradition among Jewish artists who portrayed the crucified Christ for two reasons: to indict their Christian persecutors while simultaneously attempting to arouse sympathy for Jews suffering in Europe. 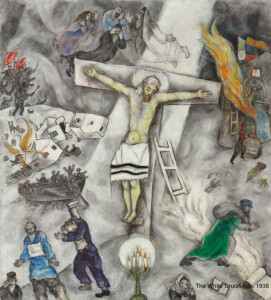 In the Spring of 1930, while living in Berlin, Chagall witnessed increasing anti-semitism. The experience shook him and he returned to his adopted homeland, Southern France. There, in 1938, Chagall painted The White Crucifixion.  The painting is eerily prophetic.

In the upper right hand corner of the painting a Nazi brownshirt plunders Torah scrolls from a burning synagogue; to the left of the cross refugees flee a burning shetl by boat; staggering toward the viewer in the lower left hand corner is a man wearing a placard that we know from reproductions of earlier versions of the painting once clearly read: Ich bin Jude.   With his art, Chagall was trying to awaken his world to a reality that remains in ours:  an abiding indifference to those who suffer.

Germany invaded France in 1940. Chagall remained in France while many of his contemporaries – the likes of Fernand Leger, Andre Breton and Max Ernst – fled to the United States. In 1941, after French Jews were stripped of their citizenship, Chagall and his wife Bella were arrested in Marseille and escaped to New York City via Spain and Portugal.  In New York Chagall experienced exile from both his homelands – Russia and France (where he was granted citizenship in 1937) . Chagall’s isolation in New York was exacerbated by the fact that his English was rudimentary at best.

After creating countless images of a Jew crucified by Christians Chagall began to identify with the person of Jesus Christ in a third way: with his own suffering.  Chagall titled the following poem The Painter Crucified:

Every day I carry a cross
They push me and drag me by the hand
Already the dark of night surrounds me
You have deserted me, My God?  Why? …

In a small gouache that Chagall painted in 1941, inscribed above the cross – and in place of the traditional INRI –  is Chagall’s own name: Marc Ch.  The painting depicts not only Jesus’ descent from the Cross but Chagall’s too.  In the upper right hand corner of the painting  a blue-winged angel descends to bring Chagall his brushes and his palette. Keep painting!  The world must awaken to indifference!

This week in our life together as a church we are living into our third week of the season of Lent.  Today is my day for posting a St. Alban’s Daily Cup and I do so late, after searching for a ‘Cup’ of good news for most of the day.  Late this afternoon I somehow thought of Chagall, probably because of the Sunday morning adult education offering for Lent that a colleague and I are leading (one that utilizes poetry and the visual arts) but also because of one of my own Lenten disciplines, which is to, as often as I can,  “make” the stations of the cross – to follow Jesus on his journey to Golgotha.

I don’t know about you but in this third week of Lent I feel like I’m still at my first Station of the Cross – like I’ve barely begun to really enter in.  Here’s the description and the prayer that accompanies the first station of the cross, in the devotional that I use:

The First Station: Jesus is condemned to death:

So Pilate, wishing to please the crowd, releases for them Barabbas. And having Jesus scourged, he delivered him to be crucified. How easy for Pilate to wash his hands and to say, “I am innocent of the blood of this man!” And how many Pilates stand before you as you stand before firing squads, and gas chambers, and prison camps, as you disappear to be never to be seen again, as you are reduced to being a choice, or a burden on society, as you are stigmatized by public opinion.

Lord, we do not wash our hands of you with water anymore but with indifference.

Let us pray: Jesus, please don’t let me turn from you, or walk away, when I see you condemned.

On this third week of Lent,