Faith Talk - Learning to Give

I thought I was reading a book on forgiveness. I suspect I still am; we just haven’t gotten there yet. You see, I just started one of the books chosen for our parish’s Lenten Reading Groups – Free of Charge: Giving and Forgiving in a Culture Stripped of Grace by Miroslav Volf.  (To check out this year’s options, click here. More on group meetings and times in this weekend’s announcements.)

The first chapter is all about giving – how God gives and how we, as those created in God’s image, are called to give as well. Unlike God’s gifts, many of our gifts end up being trades of some kind. We give in order to get something in return – even if it’s just the warm feeling of being known as a generous giver.

We don’t realize the expectations we attach to our gifts until they’re broken. Maybe the person doesn’t reciprocate in kind. Perhaps his or her expressions of gratitude aren’t strong enough for our tastes. We invite someone to dinner, and the return invite (if it comes) feels mechanical rather than heartfelt. We start to calibrate our giving based on how good it will make us feel – and in so doing, step farther and farther away from giving as God gives to us.

How do we learn to give in a way that isn’t dependent on the recipient receiving “rightly” (a prerequisite for forgiveness, in my view)? How can our giving come from a place of true generosity and gratitude, in recognition that “all things come of Thee, O Lord, and of thine own have we given thee?” I’ll get more responses to these questions in subsequent chapters, I assume – but for now, I think the communities in which we live and move and have our being can make a huge difference.

Reading this chapter, I was reminded of an episode of the late, great TV show Northern Exposure. In this particular episode, a village elder decides to adopt Joel, the town doctor (a Jew from Queens working in Alaska to pay off his medical school debts), into her tribe in gratitude for the ways he’s helped her and her people. She starts off by giving him a goat, a gift for which he has no use. After realizing the offense it would cause to refuse – and that her need to give might be greater than his need to receive, Joel reluctantly agrees to be adopted.

He then learns what it means to be part of this community. The first step is to give everything away. He’s promised vaguely that he’ll get it all back, so he lets the tribe members come into his house and take what they like. He assumes it’s just a symbolic act to help him loosen his grip on his possessions, but when the stuff that comes back isn’t “his” stuff – he gets someone else’s 2-slicer toaster instead of the 4-slicer he started with; he loses his beard trimmer and gets pinking shears in return – he realizes that his grip on possessions hasn’t loosened at all.

Eventually some of his original stuff returns. There are other initiation rituals as well. He fasts and is given nothing at first but tribal tea to drink. In time they send him food to help him break his fast. By episode’s end, he’s given his new name – “Heals with Tools” – and the tribe throws him a huge feast.

I’m not sure I’ll ever fully loosen my grip on my possessions, but it helps to belong to a faith community that consistently urges me to give – and that gives back to me in ways I can’t always predict or imagine. If I’m going to fast and give up on my illusions of self-sufficiency, it helps to be part of a tribe that reminds me that self-sufficiency was never the point.

I find myself grateful today for the Lenten practices that help to form us as a community – for all the ways that prayer and giving and fasting help to limber us up for the truly heavy lifting of forgiveness. Or as Volf puts it: “For the heart to see rightly, the hand needs to give generously” (16). For all the ways that hearts and hands are connected, and for the Body of Christ that helps us to connect them – thanks be to God. 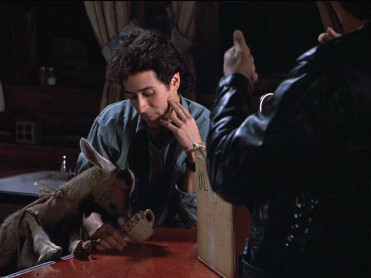 Thank you, Emily, for raising the importance of community/tribe in the hard work of Lent ... and of being a Christian.
(also a Northern Exposure devotee -- wonderful moral lessons)

Dear Emily, I'm glad we are reading the same book; it's really a good one. Thank you!

Lovely post, Emily! And thanks for the reminder-link to the St. A. Lenten activities -- finally figured out March Madness, toooo fun!!

Thanks for the comments. Glad it resonated with you!