So many truths of our lives don’t lend themselves well to words – especially when those words are in another tongue. As some of you know, I spent the last couple of weeks taking a Spanish immersion class in Antigua, Guatemala. There’s only so much one can learn in two weeks.

I’m not sure what it says about a language – or about me - that the bulk of my time was spent on verbs. Nouns are fairly stable; they don’t change all that much. Going from singular to plural isn’t that difficult. (Remembering the genders of inanimate objects is, I confess, a bit more challenging.)

Verbs, however, are an entirely different animal. In Spanish there are 14 possible tenses – each of which has its own set of rules and exceptions. By the end of two weeks, I could speak fairly confidently in the present tense about what is happening right now. I could talk somewhat coherently about actions that began and were completed in the past (i.e. in the preterit tense.) I made some progress on the imperfect indicative and could talk about things I used to do. As for the future, I could talk about what will definitely happen and what would happen if the right conditions were met.

That sounds like a lot, until I started thinking about how I’d talk in Spanish about matters of faith. Verb-wise, I haven’t gotten yet to what may happen, or what I wish would happen. I don’t know how to talk yet about actions that started in the past and continue to unfold now.

Given these limitations, how can I possibly talk about the kingdom of God? While it is within and among us now, it’s not here in its fullness. Trust me - now is not as good as it gets. Nor is it something that’s over and done with. I can talk about it in the future tense, but that shortchanges the glimpses we catch of it now. Perhaps a picture will do these thoughts more justice. 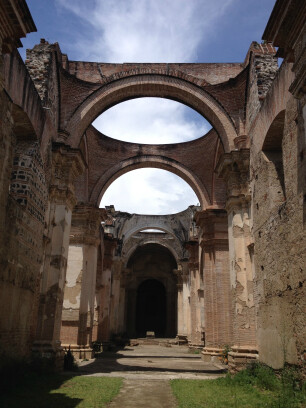 This is the Cathedral in Antigua as it stands today. In the picture, we’re standing at the back of the Nave looking toward the high altar – or where the altar would be if it were 1772. The Cathedral was “completed” in 1680 – until an earthquake in 1773 left it in ruins. Now it stands open to the sky. Grass, flowers and even trees grow where stone floors used to be.

It will probably never be rebuilt to its former majesty. In my view, it’s majestic all the same. It bears the marks of human creativity and divine gift. It wordlessly acknowledges the limits of human strength and points to what is limitless. There’s no hard and fast distinction here between what happens inside these walls and what happens outside. Even the most road weary tourists find themselves whispering here. It’s one of those “thin places” – where the distance between heaven and earth doesn’t seem so far. Peace is not unimaginable here. Here I can envision a kingdom “of every race, language, people and nation” that continues to unfold.

I may still have to borrow words to talk about the kingdom of God in Spanish, but I’m grateful I caught a glimpse of it here.