There's just no way to put a spin on this Cup to make it theological so I won't even try.  But there sure was some spin on that ball.  We were sitting very close to the field by the dugout filled with San Diego Padres players (well padre is kinda ecclesiological, anyway).  The batter hit the ball and it went up high and curved left, clearing the net.  I lost sight of the ball but everyone around me was standing with open hands at the ends of their outstretched arms.  I followed suit.  A second later I saw the ball again.  It was coming right to me!  The impact stung my palm a little, but Oh Boy!  I caught the ball!  That was a first for me, and perhaps a last, too?

Catching that foul ball at the Nat's game Friday night reminded me of Mardi Gras in New Orleans. When the floats rolled by filled with their Krewes in costumes tossing "throws" one did just about anything to nab one (or twenty).  We used to say that everyone on the parade route turns into a rogue when the beads come flying - never mind that the person next to you hasn't caught a single one or if they're young or old... this is right out of John Lyly's novel Euphues... "the rules of fair play don't apply in love or war!"

Moments after catching the ball a woman two seats to my left and sitting next to my daughter leaned toward me and said, sheepishly, "Would it make any difference if I told you that today was my birthday?" I didn't quite know what to say other than what one normally says when it's someone's birthday:  "Happy Birthday!" Then I held up the ball and added, "it's too bad you didn't catch this ball."  Just kidding.  I handed the ball to her daughter who looked to be about five years old.  But mark my words:  Next time I'm at a Nat's game I'm putting on my Mardi Gras mask and keeping whatever I catch, whether it's your birthday or not! 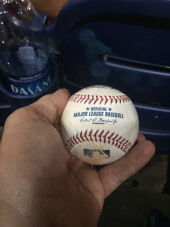 p.s.  For those of you who attended the 10am service yesterday at St. Alban's I offer the following mea culpas:  1) During the announcements I stated that we wanted to increase the number of our classroom volunteers at the Harriet Tubman Elementary school by 50%, from six to twelve.  Well, that's um, 100%!  You might remember that I started the sermon with a story about my math teacher in high school, Mr. Reedy, who graded us on a curve!  2) During my sermon I said something about my daughter's graduation status and used the word Magna.  Walking home she reminded me that she graduated Summa.  I told her that I was keeping her humble.