There’s nothing like seeing home in a new light. This week I got to see Washington, DC, my adopted city, through my mother’s visiting eyes. We spent a sweltering Monday on the Mall exploring the various war memorials – World War II, Korea, Vietnam – ending with the Holocaust Museum. None of these existed the last time my Mom really explored downtown as a teenager. She wanted to see how we as a nation marked those moments in our history, how we honored the sacrifices of the dead and made space for the living to mourn and reflect. She wanted to see what beauty we could make with all that brokenness. It was a humbling, if not exactly uplifting day.

I’ll admit I wasn’t thrilled with my stepfather’s suggestion to follow it up the next morning with the Air and Space Museum. In my more cynical moments, I’ve been known to roll my eyes (at least on the inside) at that moment in Eucharistic Prayer C when we mention “the vast expanse of interstellar space, galaxies, suns, the planets in their courses, and this fragile earth, our island home.” The language can sound dated to those of us who didn’t grow up in the heat of the space race. As a long-established humanities type, I had forgotten the awe I had as a child in science class considering our place in the universe.

Some of that wonder returned as my family and I watched “A Beautiful Planet” in the IMAX Theater Tuesday morning. This documentary shows us our “fragile earth” from the perspective of the International Space Station. If the previous day’s stops pointed to humanity at its most broken, this film cast a vision of something far more hopeful. Sure, we heard about all the dangers facing our swiftly warming planet, but we also saw American, Russian, Italian and Japanese astronauts all working together on a project that none of them own by themselves. We saw what a shared curiosity and thirst for knowledge can create.

Besides, it’s just stunning to see earth from the vantage point of outer space. It’s not just the brilliant blues and greens that silence you. It’s seeing what we look like in darkness, the patterns of lights clustered in our cities and scattered in our wild places. Yes, there are signs of destruction and division visible even from space – but they pale in comparison to the deeper beauty that unites us.

I wonder what we might glean of God based on the handiwork we see displayed from the Space Station. What kind of deity creates that kind of beauty, knowing that it won’t be seen by human eyes for billions of years? Someone who takes delight in creation for its own sake, I suspect. Someone who, in the words of Psalm 104, “spread(s) out the heavens like a curtain…(and) ride(s) on the wings of the wind,” who creates “for the sport of it.”

Or as another, less well-known prayer in the Prayer Book (p. 827) puts it: “Almighty and everlasting God, you made the universe with all its marvelous order, its atoms, worlds, and galaxies, and the infinite complexity of living creatures: Grant that, as we probe the mysteries of your creation, we may come to know you more truly, and more surely fulfill our role in your eternal purpose; in the name of Jesus Christ our Lord. Amen.”

From our lips to God’s ears, 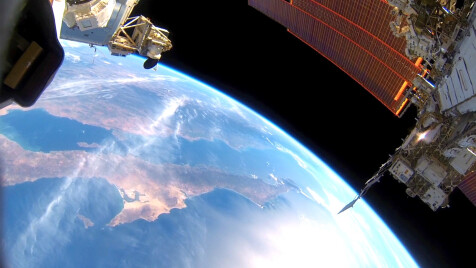 Oh thank you. What a haunting juxtaposition you observed over a couple days -- war and holocaust memorials and then the beauty of God's increasingly fragile earth. We must take it to heart.
I need to go see the IMAX movie -- I grew up a rabid space fan.