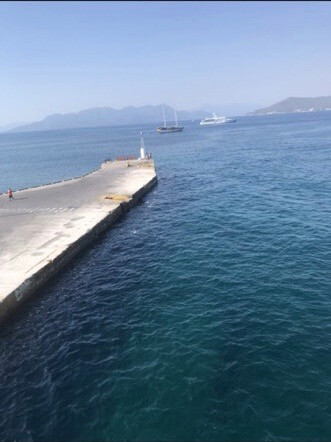 The uneventful morning of August 15 led us to the bus at about 7 AM. With our bags packed and ready to embark on this extraordinary day, we received our bus tickets and piled up on a ferry for our trip to Aegina.  We ended up arriving to the ferry a bit early, allowing time to wander around and grab some breakfast before leaving the dock. After about an hour and a half on the ferry, we arrived in Aegina, where we met up with Sandy, our tour guide for the day.

Our first stop was a big hill covered with tiny churches called Palaiochora. As we hiked up the hill, we made a few stops along the way into some of the very beautiful small churches that were developed for individual worship and prayer. At this point, those of us that decided to wear sandals in preparation for the beach instead of shoes for hiking, realized that it would be difficult to make it very far, up the hill. Half of the group decided to turn back after a few flights and the other half continued to marvel at the Palaichora, which was said to be a constellation of 365 churches in the mountains of Aegina. Today, August 15, the day of the “Dormition” of the Virgin Mary (i.e. death of the Virgin Mary), was a heavily celebrated holiday in Greece, so the churches were overflowing, and the island of Aegina full.

The next stop, an old monastery turned convent, Chrysaliniotissa. This beautiful monastery, built in the 17th century, is now inhabited by only 9 nuns and a wide variety of animals including sheep, goats, peacocks and ostriches. As we wandered around the grounds, we witnessed the beauty of the ancient architecture in the church. It was also interesting to see others on their own pilgrimage to the monastery. Although we’d been told to expect heavy crowds for the holiday, they were manageable but the lines occasionally long as the native pilgrims lined up to kiss the icon and symbolize the cross with their arms as they made their way through the chapel.

The next stop was the Church and monastery of Agios Nektarios, one of the newest Orthodox saints. Known as the Patron Saint of Healing, people come from all over the world to his chapel to pray for healing.  When we arrived at the monastery on the hill above the church, we saw a sign saying that women needed to wear a skirt and men pants, otherwise entrance was “forbidden”. Next to the sign was a line of long skirts and pants for pilgrims to use prior to entering the living quarters of Nektarios where we were able to get a sense of how modest Nektarios lived and yet he gave so much.

When we arrived at Temple of Aphaia, dedicated to the goddess of human fertility and agriculture, we made our way up the small hill to an area of worship surrounded by rolling green hills looking out over the ocean.  At the top of the pathway, we were greeted by a temple that was similar in appearance to the Athenian Parthenon, though much smaller and less crowded. We learned that the temple was built in 500 BC over the remains of another temple from 570 BC that had been destroyed by fire.

As we delighted in all of the Ancient Architecture of Greece had to offer, we all could not wait to arrive at our final destination, the beach! After a long journey of travel and reflection at all that the ancient Greeks were able to accomplish with the help of God, it was only right the we were able to continue to enjoy God’s blessings in the most beautiful blue water and grey sand that many of us had ever seen.  We set up shop at a beach front restaurant, whose owner was Sandy’s brother in law. There, we had a wonderful meal and enjoyed the cool ocean water. After our beach time was over, we dried off and headed back to Athens. While on the Ferry, we could not help but stare and I’m sure reflect on our journey to Greece.

On arrival in Athens, the Chaperones treated us to their own version of stone soup. We had delicious food and enjoyed live music. After we finished eating our food, we were called into the restaurant, where we were taught a traditional Greek dance! We formed a circle with our arms each other while we danced, chanted “OPA!!”, and smashed clay plates on the floor of the restaurant. We all had lots of fun!

We ended our day in evening prayer and a “candle ceremony”, where we picked someone at random to pass the candle on to as we said something about them that we’d learned while on this journey. We would also reveal our moment of wonder (the moment we saw or felt God the most) and our moment of adventure. By the end of the ceremony, we learned about the most impactful moments for everyone during the pilgrimage. We would leave Greece with a unique experience that only we could share. We would also leave with deeper friendships and a more insightful understanding of the Church and how to further strengthen our relationship with God. With this relationship, we will find our purpose and move towards defining the people we want to be. 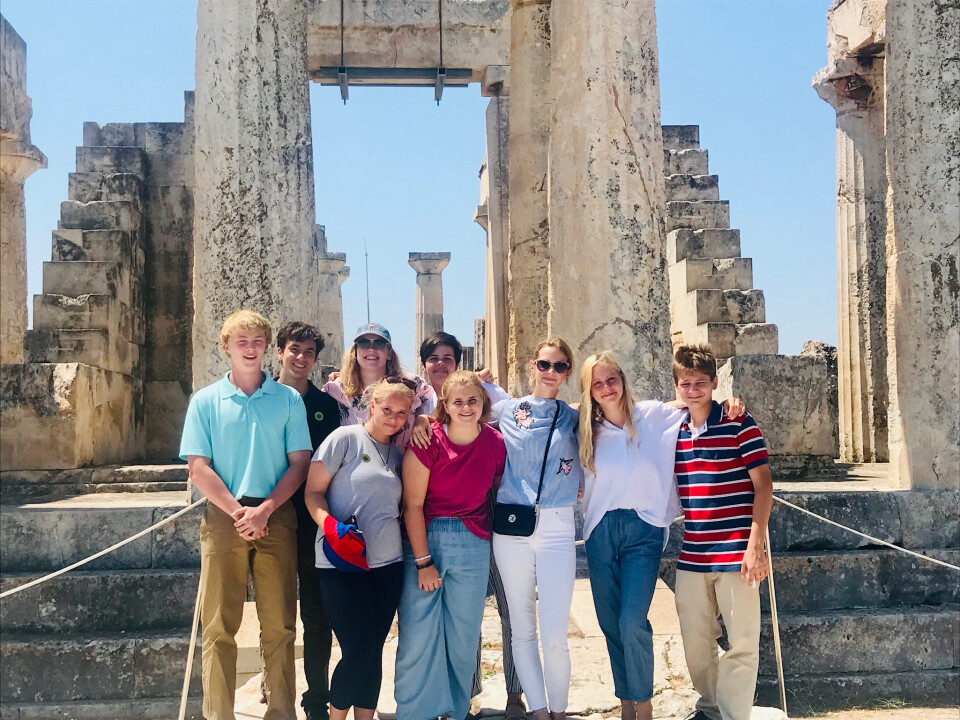 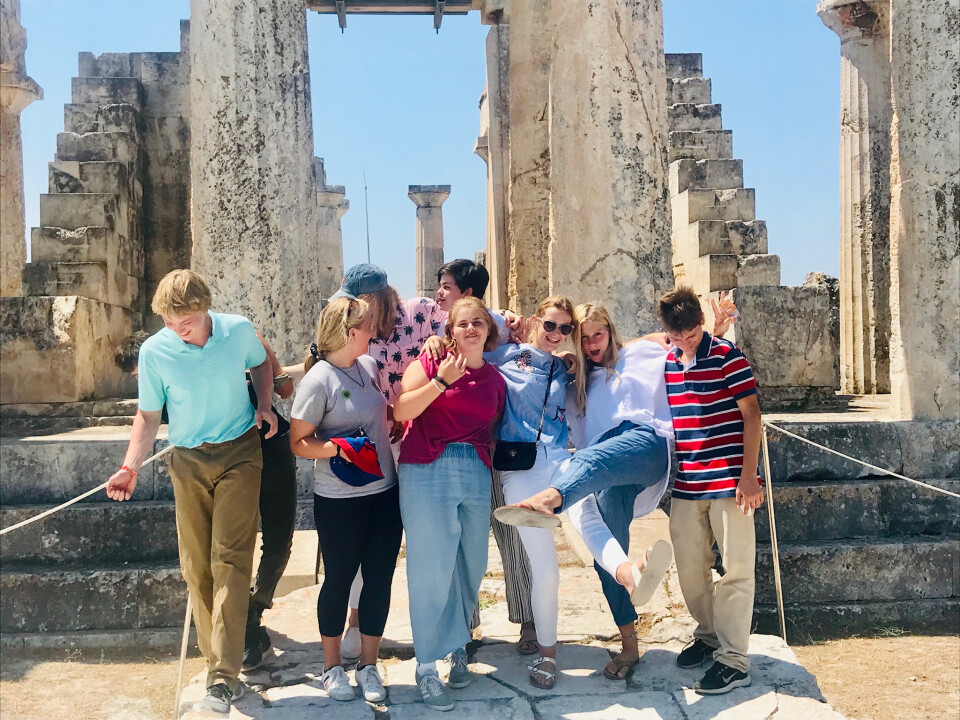 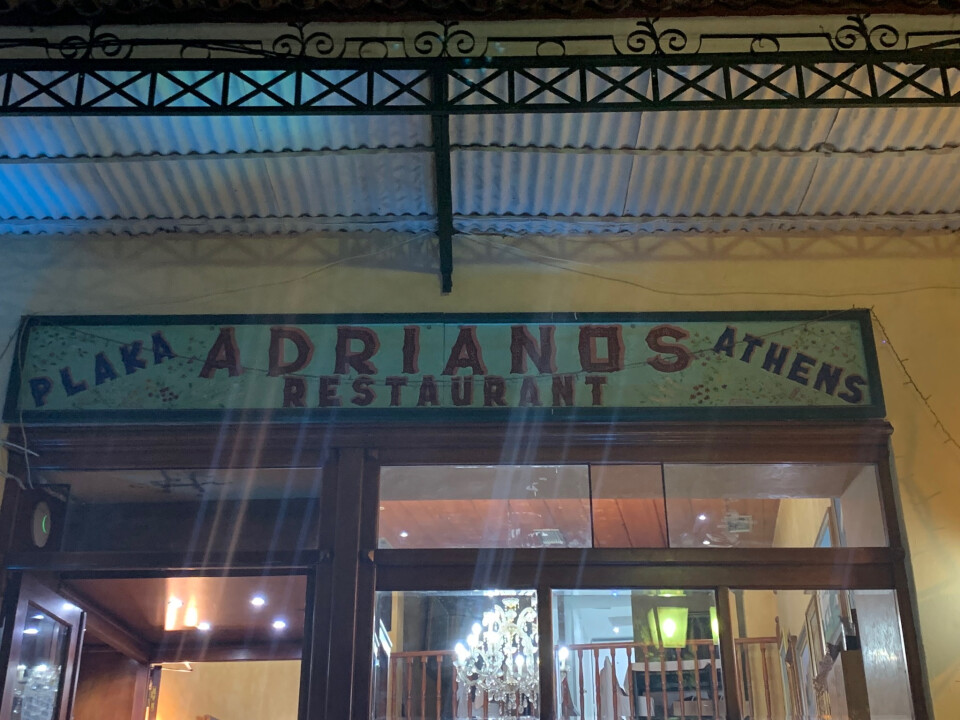 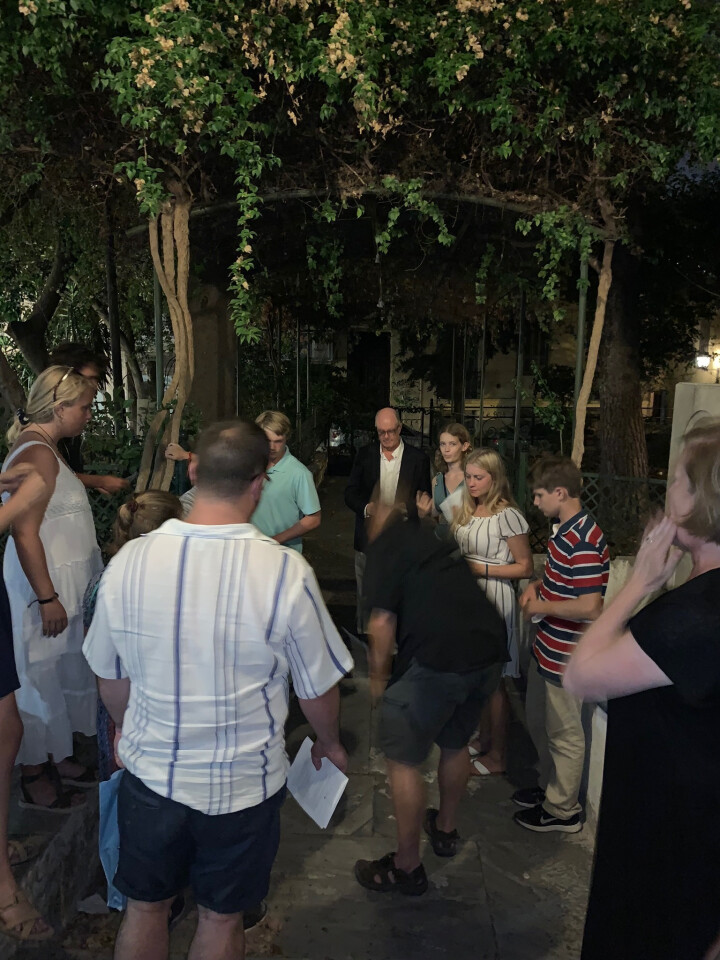 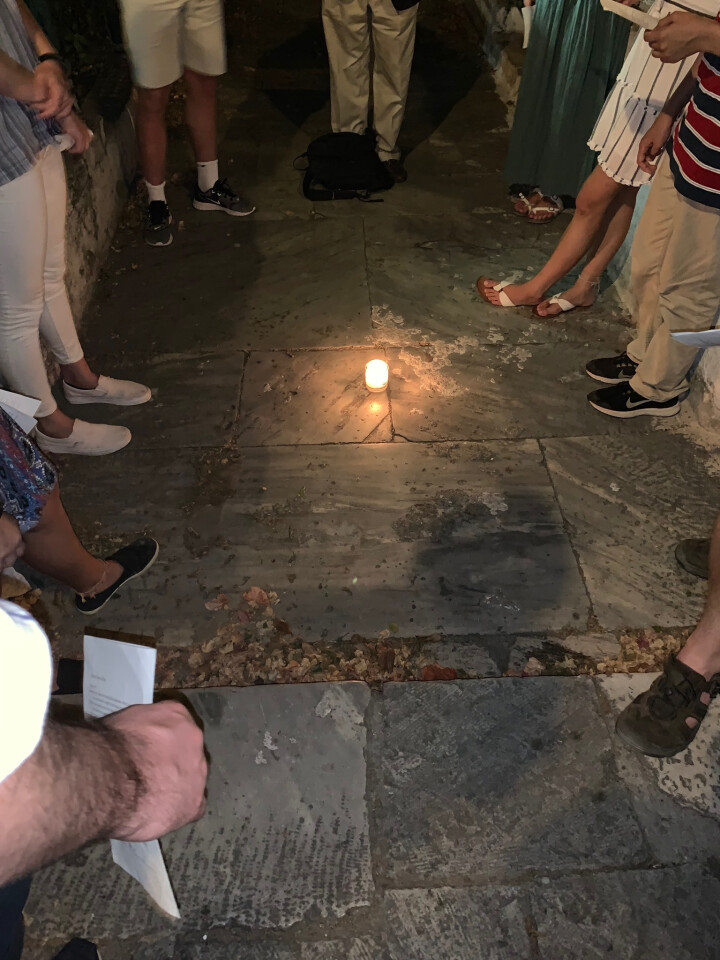